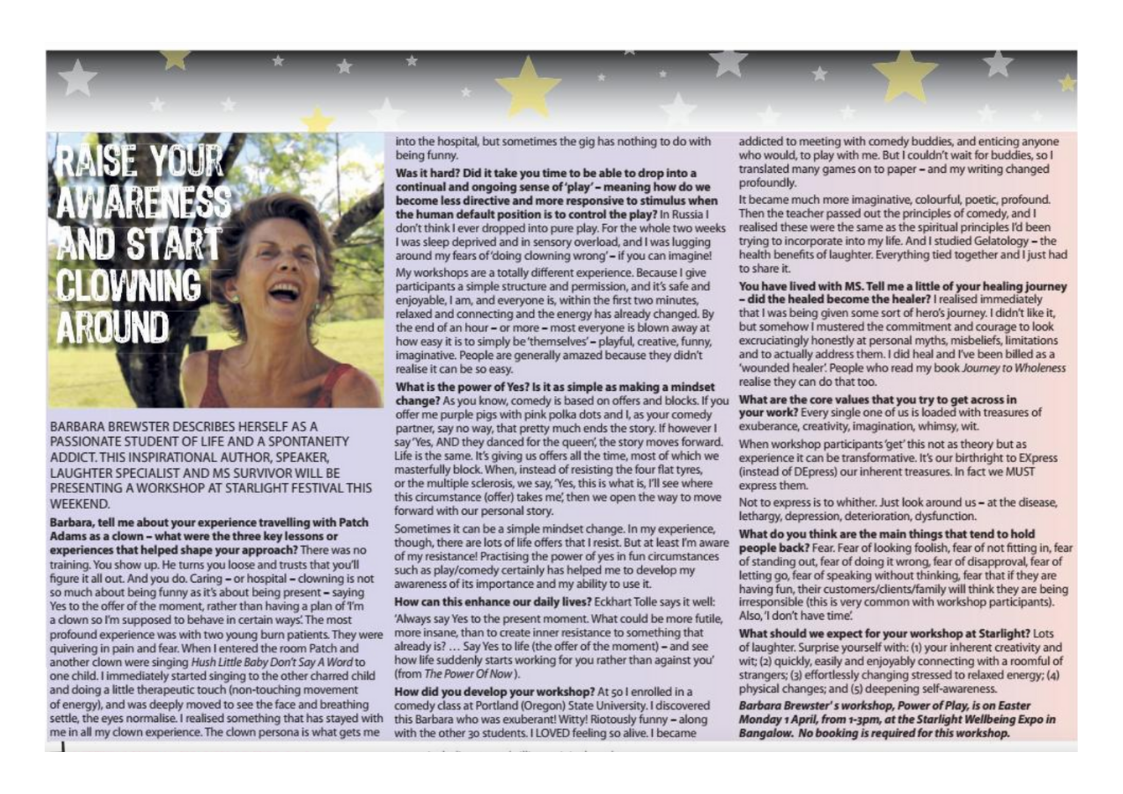 Yet it’s not the only class Barbara — who signs her name B Joy — leads. She also runs workshops — or “playshops” as she merrily describes them — for writers, teens, adults facing relationship crossroads and a soon-to-be-unveiled singing project involving witty parodies of popular tunes.

Barbara admits the workshops expose her own arduous journey to happiness — a journey that is continuing, she counters — as well as her delight in touching others. “Profundity appears, wit appears, whimsy appears,” she says to describe them. “My goal is to help connect people with their hearts and joy, and I love doing it through having them discover that they are the source of their own lightness.”

Yet it’s taken a very long time to recognise her own lightness. “To discover my loneliness,” she begins, “I had to move through, and past, my fears and weaknesses.” Barbara was born near Sacramento, California, in 1944 to Loyd and Marie — he was a small-town lawyer who played the trombone, she was a progressive teacher. But from a young age, Barbara felt the desire for adventure further afield.

Asked where this wanderlust sprang from, she uses her star sign — Sagittarian, triple no less — to partly explain her sense of restlessness. That and an Australian homestay student called Diana, who arrived on an American Field Service exchange and helped feed her host sister’s travel bug. When Barbara graduated from her high school in 1963, Australia beckoned, but it was the romanticism of Hans Christian Andersen and, funnily enough, a liking for pastry, that prompted her to complete a college year in Denmark on exchange while feigning interest in a liberal arts degree.  A visit to Australia was delayed to learn gymnastics in Copenhagen, partly to achieve the desired body shape and partly because of her parents. “They said to me, ‘We think before you go to Australia, you have to be exposed to culture’,” Barbara hoots.

On her return to the US, she immersed herself in studying Russian, attracted to the language because of its passion.  However, her mind was still on escape and she soon discovered an avenue — the Assisted Passage Scheme, an Australian Government program to lure immigrants.

The plan was to travel to Australia and send a postcard from Sydney, but the youthful traveller was persuaded to break the news to her parents in a kinder way. Loyd took it well, but Marie responded with a shocked, “‘What will I tell the bridge ladies?’” Barbara recalls. “To be fair, my parents have been very supportive,” she says. “When I wanted a horse, they got me a horse. When I wanted an AFS student, they got me an AFS student.”

Barbara arrived in Sydney aboard The Himalaya in 1967.  She went to live with Diana and her grazier husband in Keith, South Australia.  The mystique of the land did not fail to impress. “What more could prepare you for Australia than a year of Russian?” she says with a laugh.

Her first job here was teaching Grade One, but “I have no skills,” she confides. “You need someone skilful for Grade One.  My greatest contribution to Australian education was to retire.” During the next three years, Barbara discovered more of the land than many locals.  Mastering the art of hitchhiking enabled her to visit Perth, Coober Pedy, Broome and finally Darwin, creating a strong affinity with the nation.  As if to demonstrate, she starts to sing Botany Bay.  An American voice seems at odds with the Australian tune but, as she explains, “America is the country of my birth, Australia is the country of my heart.”

From Darwin, Barbara travelled north, hitchhiking and talking her way through South-East Asia. “It was a wee bit scary,” she recalls with a certain understatement.  Yet in a theme she believes has echoed through her life, she failed to recognise her inner strength and sought fulfilment through a relationship with Tim, a member of the American Peace Corps in India.

“I placed my self-worth on someone who looked like a movie star,” she says. “That is so low level, but that is where I was operating at. He was this lovely all-American golden boy.  If I was with someone like that then my self-worth would appear great to others.”

Describing their onward travels, Barbara’s picture postcard memories bring colours, smells and sights come to life.  However, the two soon realised they weren’t suited and parted company in Afghanistan. It was the early 1970s and the country was an entrepot of foreigners. “I tell you, my Russian was much better when they gave me more vodka,” she says, smiling, of her job as maitre d’ at a Kabul restaurant where she was hired for fluency in various languages. She was there for six months, a time she looks back on as eye-opening.

“I’ve seen Afghanistan when it was beautiful, mystical, magical, fertile, people laughing,” she recalls. “Since 9/11 the image everyone has had is of angry and distorted people.”

Spurred ever onwards by the words of Tennyson’s Ulysses – “for my purpose holds / To sail beyond the sunset, and the baths / Of all the western stars, until I die” – Barbara left Afghanistan. However, it was then her momentum ceased momentarily.  She went back to the US and married the kind, but ultimately incompatible, Jack. They moved to Oregon, where she owned a florist. “I tried to fit myself into a mould,” she admits. “

I became contained. Of course, I didn’t know it until way later that this was so contrary to what my heart, my being wanted.” Then came a brutal blow. Barbara was diagnosed with multiple sclerosis in 1983. “My approach was to flog this body into gear,” she says. It was also a powerful wake-up call. Six years later, she had recovered, divorced and had a new man and lease on life. “I realised I was reacting and responding, rather than being the predominate contributor of choices in my life,” she says.

Barbara married Sid (a healthcare worker who helped her through MS) in 1988, but they divorced in 1994.  The stultifying feeling of entrapment had endured.  So, to face her fear of standing out from the crowd, she joined clown doctor Patch Adams on a 1995 tour of Russian hospitals, remaining in costume and character from Oregon until her return. “He is a true eccentric,” she says. “He has no concept of conforming and that’s his greatest message. He just vibrates at a different vibration to the rest of us.”This seems to be what Barbara has learnt. Non-conformity. It is in this spirit she and like-minded souls began refugee support group Buddies in Buderim, which has supported countless asylum seekers in Australia and works in education, lobbying and advocacy. “The name Barbara means stranger,” she explains. “A stranger who comes bearing gifts.  That’s me. I’m on the outside and I act as a catalyst for people.”

Before we part, Barbara — who returned to Australia in 1998 and is now a citizen — offers more tantalising insights into her life. She was once a movie extra, a volunteer at an African cheetah reserve and more. Yet, she concludes, “I’m on the brink of what I think will be the most rich (period) of my life.”

I don’t doubt this woman, who Rolf Harris described as an honorary Australian, will have even grander adventures. And that the world will be a better place for them. 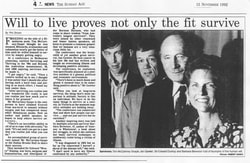 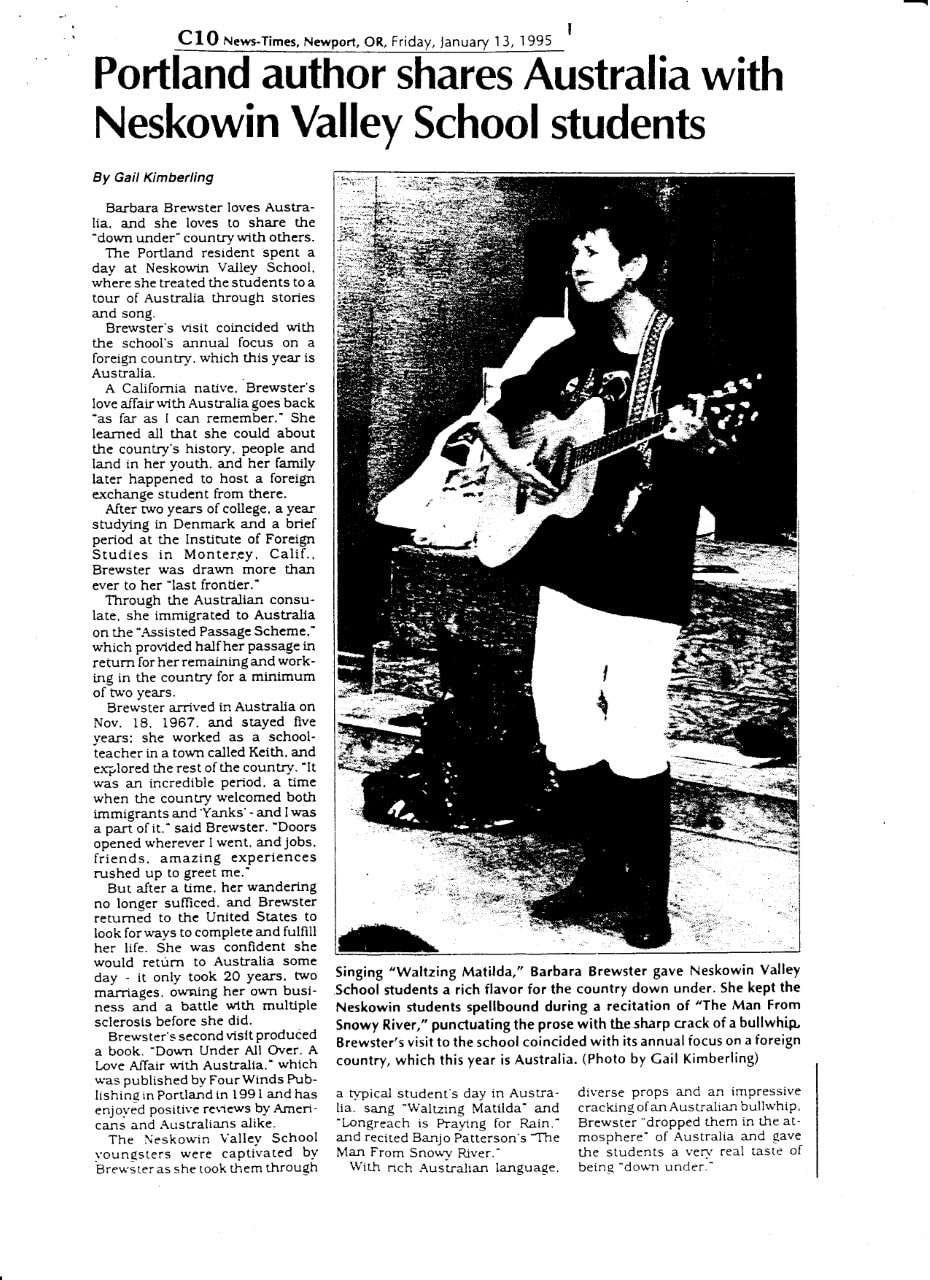